Barlow Is Having Another Bakesale! 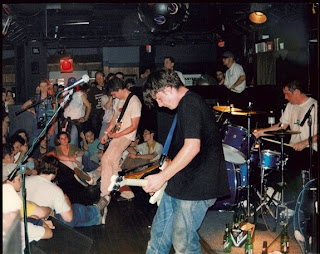 Sebadoh released Bakesale in 1994 some years after progenitor Lou Barlow's unceremonious yet somewhat funny ousting from seminal act Dinosaur Jr, and along with Jason Lowenstein and new drummer Bob Fay created a masterpiece of concise heartworn pop that they, or many others, have failed to match since. Bakesale swings like a metronome between Barlow's rumpled affairs of the heart and Lowenstein's passive/aggressive stoner stoushes, the seesawing effect of which was the formation of an album that spoke - and continues to speak - on a multitude of levels.

There isnt a mediocre track on here; hell, most of them surpass the term "good". And this is coming from someone who believes that Barlow's ouevre is patchy, whilst also really despising the man himself as a major jerk. Be that as it may, Im uber excited that Domino Records are re-releasing Bakesale next Friday (April 15) on double CD and via digital download, with a bonus disc stuffed with singles/EPs/rarities from the period complied by the titular twosome, Barlow and Lowenstein. The tracklisting, plus a bit of 'Skull', is below. Start saving, yeah!