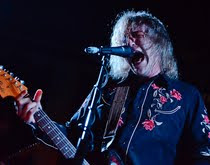 The Besnard Lakes hold in interesting place in my heart.
The only time before tonight that I have seen them live was March 31st, 2010, at Cargo in London. It was the night before I was due to fly back to Australia for a month's holiday to see family and friends. The gig was all right - I was a fan of their latest release, The Besnard Lakes Are The Roaring Night, but after a tight set by openers Wolf People I kinda got drunk with my girlfriend, my sister and a couple of mates and spent the majority of the show out the back drinking and smoking. They sounded good though... But the reason it sticks with me is because I had an amazing month in Australia, but I regret coming back for that month due to the fact that it indirectly led to my having to leave the UK for a second time, under much harsher and more difficult circumstances. Sad, but true.
Still, Im pretty excited to see them tonight, and this time I have a fan in the form of my friend Luke's girlfriend, Sally. She's been looking forward to this show for weeks, and her excitement cant help but be a little infectious. We have a few pre-show drinks (yes, audience members can have em too), and we miss Mosman Alder. But we do catch Nova Scotia, who have just released their debut LP Nova Scotia at a great album launch a few weeks ago (see my short review of it here). Tonight they arent as tight as that show - in fact, it is a little shambolic in parts. Scotty snaps a string, Ash seems to struggle with his foldback and the emotion is a little higher than usual due to guitarist Nathan's impending sojourn for the best part of a year to Thailand, so it is a send off of sorts. They still manage to shoot out some surefire gems though, and are a little more like early Gaslight Radio tonight which can only be a good thing. Their instrumental wigouts are the highlight tonight, and the noise left in their wake shows that the crowd has been sufficiently sated.
Nova Scotia - Maritime Disasters
The Besnard Lakes amble on and rumble through what can only be described as an awe-inspiring set. Ticking off all the hits from both ...Are The Roaring Night and previous gem The Besnard Lakes Are The Dark Horse, the band manages to hit both the soaring, aching highs and the rumbling, apocalyptic lows that their psych tinged atmospheric rock promises. The husband and wife pairing of Jace Lasek and Olga Goreas is integral to the band's sounds - Lasek's voice is soothing and jaw-droppingly beautiful, his gutarwork sublime, whilst Goreas' voice takes the breath away in parts, and her wielding of the bass is one of the best displays of the instrument in a live setting Ive seen this year, hands down. The encore was a bit of a letdown for me, as the songs werent as arresting and (admittedly I didnt realise this) from their earlier offerings, but i will take tracks like 'Albatross', 'And This Is What We Call Progress' and especially 'For Agent 13' and 'The Innocent' away with me - a truly beguiling show.
The Besnard Lakes - And This Is What We Call Progress
The Besnard Lakes - For Agent 13
Posted by Brendan T