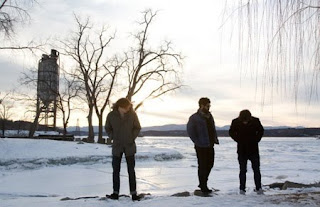 Led by Sam Sundos, The Sundelles combine the west coast vibes of their California roots with the loneliness of the East Coast which the band now calls home. Sundos formed The Sundelles, the name a nod to Phil Spector girl groups, in garages all over southern California.
The band wrote and recorded the songs for their debut album, Georgia Swan, in early 2010. This is the first time that their sound has crawled out of the garage, steering away from their lo-fi contemporaries and creating something lush, spacious, and polished; a sound that Sundos had been chasing since the founding of the band.
'Can't Win' is the first cut of the album, and has Matty McLoughlin from the Soft Pack playing lead guitar. It is an exercise in harnessing the purity at pop.

Email ThisBlogThis!Share to TwitterShare to FacebookShare to Pinterest
Labels: The Soft Pack, The Sundelles