Skull Eyes Are The Best Sign Of A True Widow 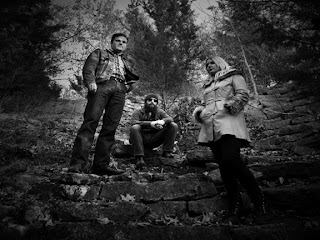 Its taken me some time (and a hell of a lot of harrassment - thanks Kyle!), but finally Im posting about True Widow. The self described "stonegazers" from Dallas are prepping their album As High As The Highest Heavens And From The Center To The Circumference Of The Earth to release on May 2nd Via Kemado Records.

I hate to ride on another blog's coattails, but Stereogum called True Widow's sound a heavier Low or a slightly speedier, Southern take on ’90s NYC slowcore stalwarts Codeine - and holy shit if that doesn't nail this album. Opener 'Jackyl' is the template of the album as a whole - crunchy, doom-laden, funereal riffs, slow deliberate basslines, eloquently driven drumming and and the dream weaving vocals of Dan Phillips and Nicole Estill. Its hypnotic and darkly beautiful - perfectly illustrated on single 'Skull Eyes' - like Warpaint if they disappeared further down the rabbit hole and ended up in a dystopian Louisiana backwater, with their only drinking buddies being a one-eyed Alan Sparhawk and the dudes from Women and Pelican. Whilst such a jam session sounds too ridiculous for words, True Widow are doing their best to make that fantasy sound their reality. Epic stuff.