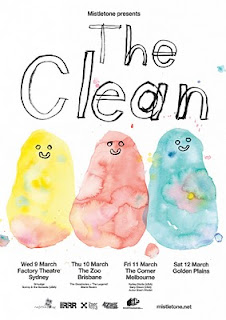 I "discovered" the Clean when my sister dumped a whole load of music on my Ipod back in 2005, courtesy of her then douche boyfriend (not saying she now has a douche boyfriend, just that the guy then was a douch...anyway...). I loved 'Tally Ho' from the get go, and have been wanting to see them ever since. My sister was disappointed by them at Pavement ATP last year, but it doesnt take much for her to be disappointed, so tonight I get to make my own assumptions.


Local indie ambient kraut rockers Blank Realm are first to occupy the stage. This is my first time of catching these guys live, although having been a fan of last year’s Deja What it was highly anticipated – and they don’t entirely disappoint. Whilst clearly chuffed to be supporting The Clean, Blank Realm’s set includes a barnstorming rendition of Full Moon Door, and some crazy frontman dancing to close out the set. The band is heavy on the instrumentation fluctuations between the members, and this may have impeded their performance, but it all comes together in a shambolic yet wild and ambitious way that has the small crowd eager for more – hopefully very soon...

The Deadnotes + The Legend! are up next, and what a lovely warped band they are. Starting off with some noirish throbbing bass and slinky sax, it isn’t long before the Legend quirks it up tenfold, wearing his wide brimmed hat and daggy attire, often chanting like a drunken uncle doing karaoke at a BBQ. Im Not Joking Around evokes Gang of Four’s Jon King in his manic arm movements and vocal delivery, whilst the lyrics are steeped in stream of consciousness repetition, with chanted vocal interplay proving to be sharp and impressive. Don’t Dial Me is avant garde art punk, whilst Hey You Arrogant Bastards sounds like an antipodeans’ Mark E Smith. Its all rather carnivalesque - I Like Dogs, anyone? - but a fucking ace show nonetheless, and the band leaves having set the bar incredibly high.

The Deadnotes + The Legend! - Make A Grand Entrance

The Clean open with epic instrumental At The Bottom, David Kilgour very much on song tonight, before breaking down into a stellar set of classic songs running the gamut of their back catalogue that has everyone riding high on the good time vibes. Name checking the Go Betweens and The Saints as all time influences as they rip through Factory Girl and Do You Wanna Go, the band particularly nailing it on Fish when they go into instrumental mode, proving they have lost none of the soul and bounce that made them the seminal underground act that they clearly still are. Special mention must go to Robert Scott, whose basslines are so fat and juicy that they fall off the bones of these tracks with delectable accuracy. In The Dreamlife U Need A Rubber Soul makes its presence felt, whilst Whatever I Do Its Right sees Kilgour take on the organ and allow his brother Hamish to take lead, to great effect. There’s enough space for the band to play their version of a punk song, before the inimitable classic Tally Ho and effervescent Beatnik see us out the door.

Seeing as this is my "first time", Im not sure whether the 22 year absence from these shores has energised them or not. All I know is, no disappointment here - The Clean are still the shit.

Email ThisBlogThis!Share to TwitterShare to FacebookShare to Pinterest
Labels: Best Coast, Blank Realm, The Clean, The Deadnotes And The Legend, The Zoo