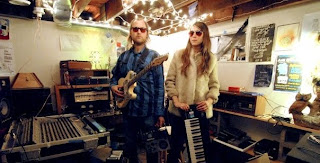 Im not sure why exactly, but Ive had spaced out Wisconians Peaking Lights' newie 936 for over a month yet hadnt thrown it on until now. I guess its another case of holding trepidation when every hipster under the sun is squirting watermelons over the thing. The thing is, it is pretty bloody good. Taking a similar trajectory as stablemates Sun Araw, Peaking Lights have that woozy opiate sun psychedelia down pat, but its the breeziness they inject into these languid numbers that are likely to ensnare you. Its a beautiful album that is relentless in its dreamlike trance, sucking you in and refusing to let you go. But by the time 936 reaches its conclusion, you will have reached the summit of Peaking Lights' otherness, seen the two suns rise, and you'll never want to leave again...

936 is out now on Not Not Fun.
Peaking Lights - Amazing And Wonderful

Peaking Lights - All The Sun That Shines from Not Not Fun on Vimeo.