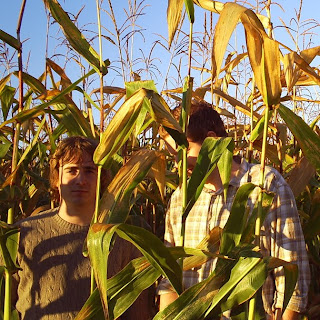 I have to to admit that this is not the norm. Whilst we do focus on past releases from time to time, we don't usually get sent old releases to cover in the post. But after Plant Magic Man's re-releasing of albums recorded over the past two years, most (if not all) of which were not even known about, it seems it may become a trend.

Surreal Auteur is the album by Ontario duo Allegories, which came out in 2008 without any fanfare. The two men responsible for the album spent a good year making it, and then building a fairly elaborate (and totally insane) website, and then didn’t tell anyone about it. That’s basically the story. However, it’s finally getting a proper release. And so it should - its beautiful, a true labyrinth of a record, where every note and sound is thoughtfully chosen, then intertwined to create a dense cross-stitch of ambient soundscapes that soar and swoop, undulating caresses, the gaps and silences as all-important as the gossamer landscapes erected in your ears. Which all makes sense when you discover that this is an epic lyrical journey with an otherworldly plot - check out what I mean here...

A piece of art that is waiting for heavy dissection, Surreal Auteur is a strange one as its hard to fathom that something this golden could have been hidden away when we are subjected to so much muck. And there is more to come - a follow-up is in the works. Hurry up and head over to their Bandcamp - you still might be able to pick it up for free - otherwise buy it here.

Email ThisBlogThis!Share to TwitterShare to FacebookShare to Pinterest
Labels: Allegories