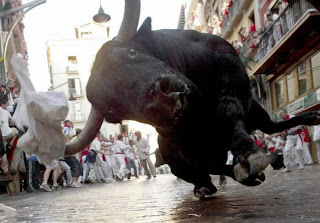 OK gang, so you have crawled through the Gauntlet that is the work week, and you are at the final hurdle. So here are some videos that will give you the impetus to make that final push to knock off time and some much needed drunken R & R...

Black Lips have been busy with their upcoming new album Arabia Mountain. Whilst it isnt out til June 7, ">we saw the video for the track 'Go Out And Get It' that they filmed whilst on the Bruise Cruise, and now we have another song to listen to. 'Modern Art' is a real acid trip, both figuratively and literally - and it has me very excited for this release...

Now Im not sure what the regular readers of Sonic Masala think of Wild Beasts, but there is no doubting their popularity further afield, especially after the release of the uber successful Two Dancers LP of 2009. Well they too are prepping the release of their new album called Smother (due out May 9 via Domino), and have a video out for lead single 'Albatross'. Now I thought that the band were ok, but I really like this song - it certainly fit my mood when I was stuck in the house yesterday waiting for my housemate to come back from work to give me my wallet that he "mistakenly" picked up. See what you think...

And I thought Id close out the innings with a video I received from Luxembourg spinouts Sun Glitters. The track, 'Feel It', is a three minute slice of blips and glitches that undulates along at a languid pace, with warped chipmunk vocals wafting throughout. Seems like the vid is of a woman orgasming superimposed over two naked people doing yoga... Strange, but the music is nice, and for office workers you only see a couple of bums so there isnt much to be afraid of here...

Sun Glitters - Feel It from João de Almeida on Vimeo.

Now get back to work!
Posted by Brendan T