Spiralling Out Of Four Quadrants 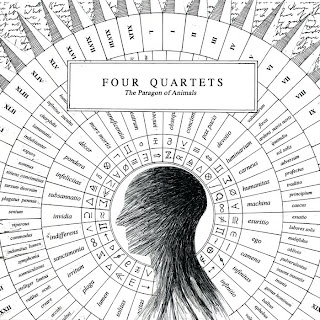 This album, Four Quadrants' The Paragon Of Animals, has been sitting on my desk waiting for a review for the same amount of time as previous postee Crunchholdoh, and this is just as criminal an overlook. The UK band's debut release, The Paragon Of Animals (out through small London label Wooden Step Records) is a vastly different beast, offering Elliott Smith-esque hushed indie melancholia ('Pirouette' and 'A Long Way Down' may as well be offcuts of the much missed troubadour mesmeric back catalogue) and the charged melodicism of contemporaries like Fanfarlo and Sparklehorse. It offers some beautiful tracks, although the similarity of some of the tracks and the chimeric voice of Rob Sharples may prove to be more than just mere adulation to some. However, if you can get past the emulation then you will be richly rewarded. Sharples is bloody talented, has a real knack for a tune, and will only grow into his music over time...