Some Pivot remixes for you... 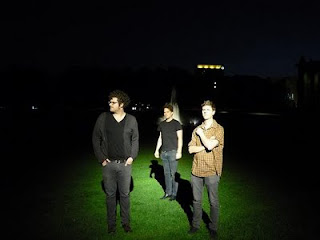 Pivot are one of my favourite Australian acts out there at the moment. They are good friends with my best mate's brother (who was their photographer back in their Sydney days), and they have relocated to London (along with another amazingly unique Aussie outfit, Snowman), and they are amazingly affable chaps that are brilliant at what they do - tight, atmospheric, damn catchy indie electronica rock.

Furthermore, Pivot - Pike brothers, guitar guru Richard and drumming demon Laurence, and electronomaniac and all round nice guy Dave Millar - are currently putting the final touches on their 3rd LP, following up the out-of-nowhere explosively impressive Make Me Love You and the assured brilliance of follow-up O Soundtrack My Heart.

Laurence will also feature on a Bill Callahan live CD where he took over drumming tour duties.

They are truly special - their gig at Hoxton Bar and Grill in May last year was a ephemeral sweatbox of writhing limbs - and will be touring again soonish. They are currently doing SXSW (arent they all?) plus scoring support slots for the likes of Morning Teleportation, Nice Nice, You Say Party! We Say Die!, and the impressive Quasi. They need to be heard (and seen) to be believed.

I will do an album retrospective of them soon (I am that keen for people to start listening to them...), but for now here are two remixes the boys have laid down in the past few months. The first was done for Warp Records 20th anniversary, a reimagining of Grizzly Bear's 'Colorado' off their Yellow House record. The 2nd is an example of probably the ONLY time you will see the Temper Trap mentioned on our blog. Not that they are deplorable - not just my cup of tea. Pivot makes them palatable here though - especially around the 2 and a 1/2 minute mark - quintessential Pivot. More to come!!!!!