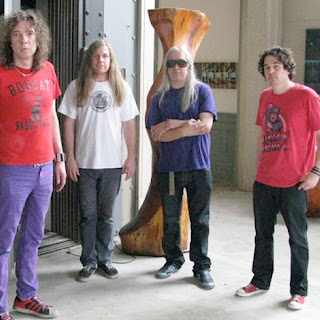 Now for the 2nd half of the 6 degrees of Sonic Youth, although these are a little more tenuous (but thats how it works, right?) J Mascis, of the legendary ear splitting noise pop behemoth Dinosaur Jr, is joining Thurston Moore in the reformation of Society's Ills at SXSW. Also playing at the Austin, Texas media scrum festival is another of his admittedly many projects, Sweet Apple. The band – Mascis (drums/guitar/vocals); Cobra Verde’s Tim Parnin (guitar); John Petkovic (vocals/guitar) and Witch’s Dave Sweetapple (bass/vocals) – are releasing their debut album Love & Desperation in April on Tee Pee Records. Their sound quite upbeat, a type fo driving, anthemic guitar pop, which is surprising due to how the band came about. Check out a slice of that sweet apple below.

Sweet Apple - Do You Remember
Posted by Brendan T