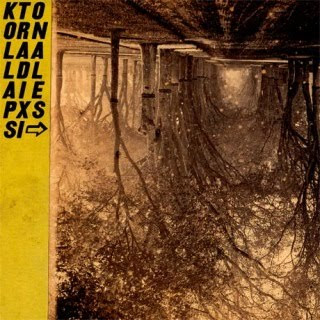 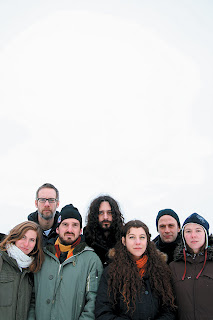 Whilst initially the band followed Godspeed's process of using samples instead of proper vocals to drive their compositions, Menuck has grown into a very comfortable leading man, his vocals (and indeed his music) moving forth at a great, and somewhat frenetic, rate. So much has been made of the evolution of this band , and indeed Menuck's vocals/lyrics, due to their genesis that it is often difficult to distinguish between the disappointed and the petty, the believers and the haters. And whilst the most notable difference in the two bands' sound are the vocals, and they have never been more prevalent than on new LP Kollaps Tradixionales, this is just one of many differences to Mt Silver Zion and their new album that not only makes them unique, but makes them an exciting and relevant band on their own merits.

'There Is A Light' is the most epic track on the album, and also serves as its opener, showing the ambition and grandiosity that have been mainstays of the band since their inception. What we also get is what I (and I imagine many Silver Mt Zion fans) have wanted in a while - an amalgam of the graceful soaring compositions of their earlier releases combining with their more angular and angry rock jams of latter years. So in the opening track we see the music rise and fall, an ebb and flow that reaches higher highs and lower lows with each try, yet never losing sight of its message of hope and self-worth. It is a truly beautiful piece of work, and as the strings, brass and percussion intermingle even four minutes into the 15 minute showcase the listener is in awe, showing that Menuck certainly has grown as a composer over the past decade.

It must be said though that this band is still very much the Rock Band that Menuck has been pushing it towards, as is evidenced by the new addition of tight drummer David Payant, and he is put to work on the next 'piece', the one two punch of 'I Built Myself A Metal Bird' and 'I Fed My Metal Bird The Wings Of Metal Birds', a dystopic maelstrom of grinding exultation, Menuck's creaky wail a constant throughout, ranting at us:
Did you see that star go out
I seen it burn
That little star went out,
Your little eyes went out...
before telling us to dance, motherfuckers. The nihilistic, politically charged soundscapes are further augemented by dark lyrics about burning flags and mud and charred earth, before coming to an audacious and yet world weary close on the other large track, 'Piphany Rambler', which strays from the book somewhat by never exploding like its predecessors on the album, providing no tension or catharsis, but preferring to trudge over the horizon, a truly dour and yet fitting close to this experential album.

In my opinion, the amalgam of various Silver Mt Zion musical tropes from over the decades and Menuck's vocals soaring over the top truly comes together on Kollaps Tradixionales. It is another of those true albums - one for the headphones. And yet it still has some outstanding stand alone tracks. This is just begging to be played live...

Luckily for you, you can see it in all its glory at Camden's Electric Ballroom next week, Tuesday 23rd March. Tickets are selling fast. It truly will be a sight to behold, so have a taste below.