Heirs to the Dark Throne... 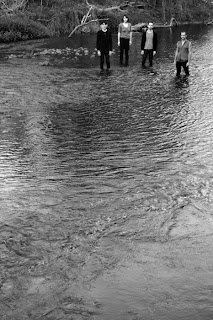 There is a reason I still have a MySpace account. One sole, solitary reason. And that is music. I follow bands, encourage them, listen to their new gear, meet like minded people. Actually, you can pretty much scratch that last part - other than occasional emails to bands about tours/albums/dress sense, I am incommunicado. Now this means that you have bands trying to become your friend that are utterly shit - hence the deliciousness of the deny button. But then there are the bands that like what you are into, and throw you a line, asking for you to listen to their music and see what you think...

And they are fucking good.

Netherlands's We Vs Death was one such band (for another day...), and today it is Heirs. A 5 piece from my homeland, these Melbourne, Australia residents (from a cluster of underground acts such as Whitehorse, Love...Like Electrocution, and Damn Arms) are a doom-laden post-rock affair that attempt to infuse elements of Red Sparowes, Mogwai, Mono, Swans and Whitehorse into a smelted black mess of dark and destructive...beauty? Sure, they can be destructive, but elements of their debut LP Alchera, such as The White Swell, does exactly that - swells up into a maelstrom of wall-of-sound elegance. However, it is the brute force stuff they are best at. You can download the album for free here - in the meantime, get a taste below. They are touring the UK in October, so we will keep you posted.