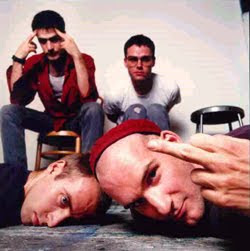 A lot of musical influences come from friends and family. You know - raiding your parents' record or cassette collection, being forced to listen to your older sibling's 'new music' that you 'won't get', etc etc.

Of course, it can come from people you admire for not just their musical taste, but their commitment to all things aural. My collaborator in crime on Sonic Masala, Paul, is definitely in this category. Others I think of in this vein are the trailblazers whose lives and careers have revolved around discovering good music before anyone else - the late great John Peel immediately springs to mind.

Coming from my own Australian background, the only radio station that had any kind of finger on the pulse of good music is/was Triple J. The 'king'pin of this national youth station was Richard Kingsmill, a DJ who for years had coaxed all who would listen to get involved in music of all facets, from all over the globe. He was/is the Antipodean Peel. So when he strongly recommended something, you made it top priority to check things out.

At the end of each year, Triple J announced a Top 10 albums of the year, as voted by the listeners. All DJs would collate their own list, and Kingsmill's was always the one I would scour. I know I was a late bloomer to discover this band, but it was Kingsmill who put in his top 10 of 2001 Fugazi's last LP, The Argument. I went and bought the CD the folowing week, and was blown away, incredulous that I had not heard of this band before. World renowned for their abrasive political punk art-rock, and rising from the still brightly burning flames of the Washington DC hardcore scene, Fugazi had paved the way for bands like Blood Brothers and At The Drive In (and to a lesser extent bands like Sunny Day Real Estate) to have a stake in world domination.

I know that The Argument is not their best, but as is usually the way, your first taste of a band is usually the most memorable. When I heard "Cashout"'s brilliant opening of Guy Picciotto sliding his fingers along the strings of his guitar in a quick and brutal fashion before an insistent, menacing drumbeat took over, I knew this was for me. Ian Mackaye's song about social displacement at the hands of the Big Business fat cats, the politically charged lyrics certainly appealed to the teenage angst within me. However it is much more intelligent as that, which is why their music stands as a testament to intricate and angry rock, in no small part opening up the market for sub-genres such as math rock.

Fugazi are brilliant. Any of their albums, and most of their songs, are must owns. If you havent heard them, listen to this, and buy post haste. If you have - revisit, post haste. And wish for their re-emergence - Fugazi being on indefinite hiatus, it is the one reunion Id give an arm and a leg to see.

And of course, thanks to the King - an indirect influence on me, and this.