Nothing People - Anonymous No Longer 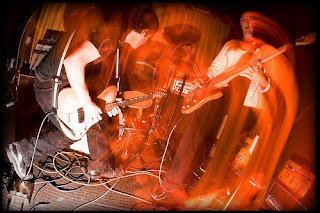 It is clear that in recent times that the music world has craved lo-fi garage rock in its various guises (as evidenced in our previous predilection for bands of their ilk). So I am always wary to post something about a band that is riding the hype of this currently hipper-than-thou genre without merit. I think we have done pretty well thus far - although my gig review of the Dum Dum Girls might appear to be on the contrary (Im still giving them the benefit of the doubt, honestly!!!). And I think with Nothing People, we have another exciting winner on our hands.

Nothing People are a four piece from North California, about to drop on us their third LP in as many years, Soft Crash. They have done their darnedest to keep out of the spotlight - their debut, Anonymous, highlights this - and its hard to glean much information about them at all. However with a release like this their time in the spotlight is surely near, whether they like it or not.

Soft Crash actually shows an evolution of sorts for the band. Their first two releases echoed the lo-fi fuzziness that has become prevalent in the genre, but whilst the album echoes some of their influences (Joy Division, Silver Apples, Sparks) this latest shows more emphasis on dark reverb and an element of ambience in some of their tracks. There are songs that evoke the synth-driven minimalist style of the times; others rocket through with a punk strength that gives the music more gravitas, and the band shies away from the vacuousness of other band wagon jumpers.

Nothing People are not just a band to watch, they deserve their hyperbolic comparisons to the likes of the Vivian Girls. Enjoy.