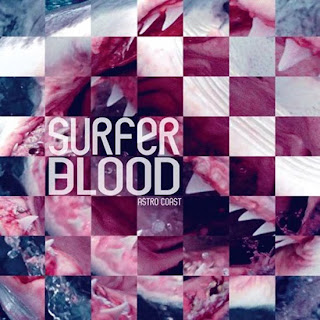 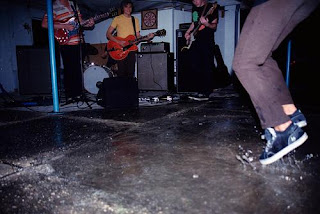 Surfer Blood have already been shackled to the 'Next Big Thing' ball and chain, but have also been heralded as the forebears of a resurgence in surf rock. Both of these labels are a little unfair. Surf rock in many respects is a niche genre - what these Floridian boys offer is more akin to slacker guitar rock, having more in tune with Rivers Cuomo and Stephen Malkmus than Brian Wilson and Dick Dale. Furthermore, the 'Next Big Thing' these days is a detrimental rather than a monumental banner to attain - these guys have so much more going for them than a cover of NME and a spread in Rolling Stone's Whats Hot in 2010.

But in some ways they bring it on themselves. The broad sunny anthems inclement in their admittedly infant oeuvre, added to their moniker and the name of their debut LP, Astro Coast, would seem to push them forth into the surf rock arena. And they're from Florida - I mean, come on! And they are clean cut, fun loving boys who are blowing all and sundry away. And they have been namechecked by NME's current 'Next Big Thing' The Drums - I mean, seriously!

But as they say, the proof is in the pudding, and a cursory listen to debut LP Astro Coast accentuates Surfer Blood's propensity for big hooks, bigger melodies, and total domination - in a sunny way of course. What grabs from the outset isn't that we have travelled back in time to a place of sun, surf and longboards, but to one of cardigans, black rimmed glasses and Converse High Tops. Opening tune "Floating Vibes" epitomises this notion - swirling guitars hitting with a one-two beat combo that could drive the most elementary of high school cover bands forward, until the bassline chimes in to remind us why Fountains of Wayne used to be cool. Then vocalist John Paul Pitts starts in. His warm harmonics are as much a driving aesthetic of Surfer Blood's appeal as those swirling, shimmering, beautiful guitars. And shit - are those strings I hear in the coda? The boys have ambition.

The album continues in such a rollicking fashion, but also highlight the highlight of many indie bands at their peak. Single "Swim" has been about for a while, but reaches its zenith here, all reverb in an arena vocals, crunching riffs, sparkling Weezer of Blue Album era finger picking, and anthemic choruses. "Take It Easy" is Vampire Weekend like in its Afro beat and soaring vocals, and yet is not smarmy in its tongue in cheeky artiness (yes, I really dont like Vampire Weekend unless someone else is doing it - so sue me!). Harmonix mirrors Arcade Fire, whilst Pitts' voice reaches the rafters as James Mercer does in some of his best Shins work.

But is this mere aping better bands?

No. Why? Because Surfer Blood have written amazing, classic, rock tunes, that's why. Astro Coast is amazingly crafted, and I dont mean in some elegaic, convoluted, overtly ambitious way. It is simplistic in its notion of what makes a good tune tick. Like their compatriots Japandroids, they are young guys who are enjoying playing their instruments - and whilst that two piece deal out scuzzy guitar rock with youthful zeal, their essence is identical - life is great! So yes, the intricacies of many a modern indie classic have been observed and praised, but its time that we harken back to days when guitars were played, drums were flayed, and everyone had a good time. Thank you Surfer Blood - you've served your purpose well.