The Father of Gods Makes A Musical Menagerie 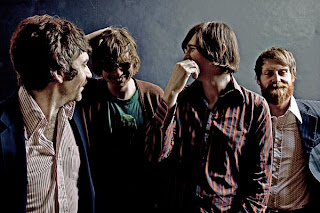 Zeus, the Greek god of Gods. Ruler of Mt Olympus. God of the sky. Bearer of the thunderbolt. About to be played by Liam Neeson. Very now, in the then.

Zeus, the Toronto four piece. Melders of extreme influences - Fleetwood Mac, The Kinks, Syd Barrett, John and Paul. Purveyors of immaculate denim and moustaches a la The Band. Very then, in the now.

Zeus are (as is the way right now) splashing South By South West in sepia tones and fire tinged edges, in their first stage of taking over the world and dragging it back 30 years, into a world of 'classical' rock pop. Chaperoned by Broken Social Scene collaborator and influential singer/songwriter Jason Collett, the band, the core dreamings of kindred spirits Mike O'Brien and Carlin Nicholson, Zeus aim to bridge the Pro Tools era of now to the days of achingly simple harmonies and 45s. The guys dont have plans to tour Europe or the UK any time soon - slowly but surely - but it certainly is refreshing (?) hearing these vintage sounds in such a lovingly and engaging manner.

Zeus - The Sound of You

Zeus - Marching Through Your Head from Arts & Crafts on Vimeo.