The Glove Fits #3 - Wish You Were Here (literally) 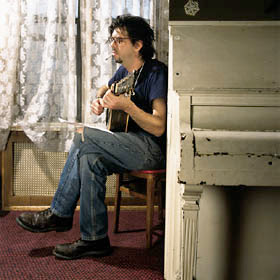 This week's trip down memory lane has been hastily erected - my original piece was all set and ready to go, but a tragic event has taken precedence - the tragic suicide of singer songwriter Mark Linkous, more commonly known by his bedroom folk pop moniker Sparklehorse. He was found outside his friend's home in Tennessee on Saturday with a self inflicted shotgun wound in the chest. This news has sent tremors throughout the music world - Linkous has collaborated with some of the world's greatests producers and musicians, and has left behind a unique canon of music that was engaging, ethereal and hauntingly beautiful.

So whilst my thoughts are tainted with sadness, Im choosing a song that, whilst not written by him, has stuck with me ever since I heard it, and his version has epitomised everything that I hold dear.

I first heard Pink Floyd when I was a kid. My father never listened to music that often, but one of my favourite memories of my childhood was when it rained on the farm on weekends. Dad would down tools and spend the Sunday at home, hanging out with me and my sister, playing his records. He put me onto Fleetwood Mac, Dire Straits and Bruce Springsteen, my platform for my burgeoning love of music, but Pink Floyd wasnt his strong suit. Nevertheless, it was Dad who put me onto songs like Another Brick In The Wall, Comfortably Numb, and this one, Wish You Were Here.

And yet it wasnt until my first year of university that I truly embraced the song. I have my friend Hugh to thank. We used to sit around on a sunny hungover morning (and there were many) and sing along. These memories have always stuck with me, so that even when some two-bit busker or deluded cover artist is strangling it, I still hum along.

But my favourite version, for whatever reason, isnt the original. As Sparklehorse, Mark Linkous supported Radiohead on their OK Computer tour, where he became good friends with the band, particularly Jonny Greenwood, who spoke of Linkous' death on his blog:

"His first two records were very important to me, and I carried his music from the tour into my life, and my friends' lives too ... Mark wrote and played some beautiful music, and we're lucky to have it."
On that tour, Sparklehorse did an EP which featured Linkous and Thom Yorke doing a ghostly rendition of the song.

So I send out my condolences to all who have been touched by Linkous and his music, and endeavour to make sure his music lives on in our hearts.