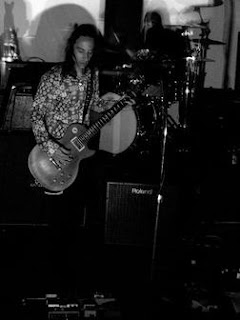 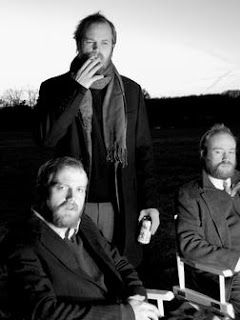 Oh how I love the Luminaire. The premiere music venue in Kilburn, and one of the most outstanding music venues in London, they run by their own rules. The quiet policy during sets is something that should be a mainstay everywhere. After all, why pay money to see music if you are just going to talk over it? The genial staff, the velvet curtains, the ever reliable PA track list, the intimate setting – all bodes well for an enjoyable evening. Oh, and all this is within walking distance to my ramshackle abode, which makes venturing out into the irascible nature that is London’s weather (and the fact I have a bulged disc in my lower back, due to picking up my shoes early one morning – ever so rock and roll!) that much less of a strain.

Tonight we have a showcase of sorts from Thrill Jockey Records, and they have billed it like a headline heavyweight fight night – White Hills Vs Pontiak. On the undercard – the Notorious Hi Fi Killers. Unfortunately I miss this one, but from the snippets I glean from the small crowd who graced their presence, the single launch was a success, one guy likening them to 13th Floor Elevators via Bo Diddley. Interesting. Ill keep my eye out for them in future.

So I hobble to the front of the slightly raised stage to catch Pontiak. Three brothers. How I wish I had brothers – sure, we’d lock horns over many a trivial issue, put each other into headlocks and give each other wet willies, whilst having pangs of envy over one’s natural athletic ability or another’s uncanny knack of attracting the women who I had a crush on since fifth grade – but Id also have a ready made band, ready to rule the world. And whilst my only sibling, Sara, and I have dreams of our two piece outfit The Red and Blue Marbles eventually becoming more than the heady dreams of our adolescent youth (watch out 2040! The world’s first sextegenarian debut band will defy all odds to conquer the world!), the family band will remain out of my grasp. The three Carney brothers, on the other hand, have taken their opportunity by the horns and created Pontiak, a band whose brand of stomping blues/sludge metal/stoner rock belie their initial stage presence. Their substantial facial hair and wispy head hair denotes more of a rustic psychedelic folk band a la Bon Iver or My Morning Jacket, but the lack of a flannel shirt in sight hints otherwise. As did their first track – an unrelenting slab of drone rock that is as enthralling as it is face-numbing. Although singer/guitarist Jenning has troubles with his mic, everything else goes to plan, Pontiak subjecting the crowd to a set of loud, abrasive and ultimately groove-laden numbers that raised the bar high for the main act. Not only have they won over another fan, I am almost tempted to leave the venue now, all of Pontiak’s LPs, EPs and miscellaneous merchandise under my arm, and make my way to the nearest laboratory to conduct as much genetic splicing as I can so that my familial rock formation can finally be realised.

Instead I settle down over a pint. Just as well. White Hills come onto the stage. I thought that they may have been punching above their weight – that Pontiak may have delivered the killer punch before the headliners even had a chance to raise their gloves – but their appearance alone made it clear that this match up was a true clash of the titans. Lead singer and eponymous White Hills wunderkind Dave W. swaggers out, his white-pancaked face highlighted with a stripe of red across the eyes, his lanky hair framing it all. Don’t get upset with me here, but my first thought was of Marilyn Manson. Disgraceful, I know. But then bassist (with the fitting moniker Ego Sensation) came on with her clear bass and an outfit that would not be amiss on the body of Barbarella, Raquel Welch or one of the Z-Grade actors on Cat Women of the Moon, all silver shoulder pads and V-frames, with tight latex leggings… Unfortunately drummer Lee settled for more normal fare, with just a khaki tee and jeans, but considering the mad flailing that was about to contort his body in the upcoming hour it made much more sense. The set, consisting of a mixture of old material and stuff off their new (and first) album on Thrill Jockey, White Hills, is pure wailing space psychedelia – the droning guitars, feedback, swirling thunder drumming – this was a galaxial head trip. An organic, epic, mesmeric mind fuck. A very loud one at that – restraint checked itself out a long time ago. There was so much flailing, gyrating, guitar swinging and cymbal crashing though that it wasn’t until I got home that I realise I can barely hear a thing. And the grin plastered on my face is testament to the fact that this is a very good thing indeed.

So, who won the knockout? I can’t surely say. It was no David and Goliath meta-struggle – more of an arm wrestle between celestial colossi, one which came off as a stalemate, with both contenders coming away with their dignity and reputation well and truly intact, and the spectators’ expectations truly exceeded.