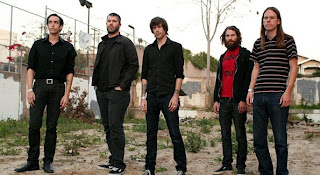 Having culled current and former members from the likes of Isis, Halifax Pier and Neurosis, Red Sparowes goes to great pains to distance itself from those popular merchants of doom. And for the most part, it’s right to disassociate itself from the propulsive assault—the post-rock band’s most dramatic moments arrive in undulating waves rather than crashing full bore on the listener’s head. The band takes a page from Explosions In The Sky and Godspeed You! Black Emperor's epic soundtracks and marries them to the sinister buzz of early Sonic Youth for a uniquely disquieting sound.

I came to these guys via viral association - whereby a search engine or site (think Amazon) gives you recommendations based on what you have viewed/bought (an article on this 'phenomenon' to follow soon...). This was one of the few they got right.

Red Sparowes are about to launch their 3rd LP, The Fear is Excruciating, But Therein Lies The Answer. Produced by Toshi Kasai (Tool, Melvins), who also engineered their Aphorisms EP of 2008 (released as a 12" in 2009), the album promises to be a progression on their pursuit of the perfect balance of darkness and light. Expect an album review in the upcoming weeks. While you wait (hopefully in anticipation), sample a track from it below.

Red Sparowes - In Every Mind
Posted by Brendan T