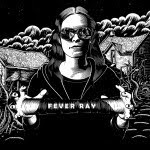 Learning: never believe a band when they say it is their last gig ever!

Fever Ray announced last year they wouldn't do any more UK gigs. They seem, however (and thankfully!), to have given up to public demand and they will be playing at the O2 Brixton Academy on September 8th, as well as Bestival the following weekend. Karin and her band will also play Coachella in April and La Cigale in Paris in September.

Tickets for the Brixton show will go on sale on gigs and tours at 9am on March 12th. If you haven't seen them yet, get on the case - you will be on for one of the most mesmerising live experiences you will have.

I saw them live twice last year: at the Shepherd's Bush Empire in July and at The Forum on December 5th (which was meant to be their last UK date ever) and I can now understand why their set up and soundcheck can take several hours. It's not so much about the bucks that go into creating a super-production a la U2; it's about the thinking and attention to detail that goes into every single element of it. From the first laser to the last thread of their costumes, from the first drum kick to the last breath, everything is there for a reason: to create an unparalleled haunting atmosphere that will make you live and breathe Fever Ray to the last of your cells.
Posted by Ani I