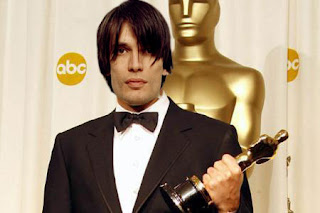 As any Radiohead fan can attest, the band's brilliance is just as influenced by the weird wizardry of guitarist/multi-instrumentalist wunderkind Jonny Greenwood as it is by frontman Thom Yorke. If this was ever in doubt, a listen to the two film soundtracks he has scored - BBC human documentary Bodysong and PT Anderson's oil-drilling drama/horror opus There Will Be Blood (which he should have won an Oscar for - seriously, he wasnt even nominated! Babel was good, but not that good...) - will have you in thrall with his amazingly textured compositions.

So it is with an enormous amount of excitement that I can say that Greenwood is scoring again - this time for an adaptation of seminal Japanese author Haruki Murakami's Norwegian Wood, to be directed by celebrated Vietnamese director Anh Hung Tran (Vertical Rays of the Sun, The Scent of Green Papaya). It is a a bit of a way off, although the genesis of the score is said to come from a piece he has written called "Doghouse".

We will keep you informed. In the meantime, hunt down Greenwood's other soundtracks, watch the films, and read the book.

And fingers crossed (although highly unlikely) that the above picture can become reality this time around!!!