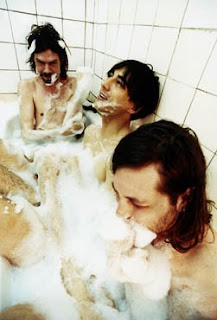 I am enraptured by Liars. Enamoured. Entranced even? Everything they do is a constant source of excitement - I wait with bated breath to see what they do next. Its hard to put a finger on.

I came across their debut LP They Threw Us All In A Trench And Stuck A Monument On Top at the same time I was discovering much of 2001's Next Big Things, and found that album's spiky, gritty, slightly evil post-punk sound to be the pick of the bunch. I still have a poster of that album's cover art on my bedroom wall. And I still maintain that it is a great album.

Then again, I admit I lost the plot a little with their second effort, They Were Wrong, So We Drowned, a deliberate attempt to about-face from their plaudits and do whatever the fuck they liked - which proved to be somewhat counterproductive, as much of the fanbase that they had cultivated promptly gave them the bird and disappeared. I was not quite one of those, though. Sure, I came to the album expecting one thing and getting something else entirely. We aren't talking about Nevermind to In Utero here; we are talking about a musical shift of a completely different plane. And this was highlighted on their 2004 tour of Australia, the one and only time I have had the pleasure to see them live. The people at that stage were expecting Mr You're On Fire Mr. What they got was 45 minutes of droning, wailing, mangled violent otherness. The place didnt empty - Black Rebel Motorcycle Club were on next, and many were around for them anyway - but there was a hell of a lot of space up front to see the brutal weirdness that was being concocted onstage. And whilst I never truly understood the sheer brilliance of what Id seen until some years later, it allowed me to give 2006's Drum's Not Dead a chance.


Thank God for that. What I still consider to be their album masterpiece, Drum's Not Dead is the true epitome of a concept album - but what elevates this above such conceited notions is that Liars never saw this, or any of their albums really, to be concept albums at all. The cohesive nature, the inherent weirdness, the tribal howling and chanting, all coalesced into something uniquely powerful and utterly fulfilling. If Liars weren't their own brand/genre before now, they well and truly owned their own space now.

Then their fourth album, self-titled, showed Liars being somewhat more conventional again. What the fuck? Were they fucking with the music populace all along? No - if anything, Liars cemeneted the band's knack for playing what they wanted to play, when they wanted to play it, in their own inimitable style. Sure, the songs were more concise, therefore fitting the more comforting notions of what a normal album should be like - but each song, whether it be an influence on Can, Sonic Youth or even acappella, is skewered savagely and roasted to within an inch of its life so that is indistinguishable from its origins. It didnt have the flow of the previous two albums, but Liars' aesthetics became a little clearer.

And finally, we come to this year's album, Sisterworld. A arbitrary, overwrought introduction to an album review? Hardly. The thing about Liars is that all information gleaned about them informs what they do. Each album has been immersed by birth of origin, experience and geography - Sisterworld being the outlet of all of this when returning to LA from their jaunts Stateside and abroad (particularly Berlin). And it as an album not only defines the band now, but showcases the evolution of this unique and avaricious beast whilst also exploding the Big Bang potential of a Liars-led future - infinite.

Sisterworld could once again be lumped clumsily into the concept album grouping, but as frontman Angus Andrew has stated time and again, having a through line to connect your songs allows for cohesiveness and does not necessarily imbue a certain story to tell. There is no Ziggy Stardust-isms here. Instead, there is weirdness, ambiguity, frailty, fear, all of which are Liars staples, all thrown into the mix of cleverly layered and structured songs. Tension is evident throughout, never moreso inherent than in single and opener Scissor, which opens up in a choral manner, Andrew's voice tremolously lamenting his inability to save someone 'beacause Im a coward.' All of which is jarring to what we expect of Liars - then the volcano of scuzzy guitar and visceral noise hits, and a cathartic release flows forth. This song in many ways is the only time such release is allowed. No Barrier Fun is ominous lullaby material; Scarecrow On A Killer Slant is a distorted angry rant with scuzzed-out guitar and no wave era bass, yet inkling at 70s punk; Proud Evolution comes close to chillwave; yet throughout it all is that parevasive measure of unease. Whether it be the lyrics (Scissor - I dragged her body, to the parking lot... Just then I began to quiver, when I saw her looking out, she was alive and she’s BREATHING; Here Comes All The People - the end chant of counting victims one by one), the punishing drumlines, the lurking bass rumbles, the otherworldly harmonics - there is no escaping that the allure of this album is equally what irks and disquietens.


Sisterworld has elements from all of their albums - the razor-edge punk rock of Monument..., the obtuseness of They Were Wrong, the atmospherics of Drum's Not Dead, the songwriting aesthetics of Liars, all wrapped up in a bow of distinct...Liarsness. There is no other way to put it. This is a Liars album - brilliant, equally approachable and toxic, and unique. Sisterworld is not a place I would want to live in - but am inextricably drawn to nonetheless, with slack-jawed gay abandon, like a lemming... You have been warned.
Posted by Brendan T