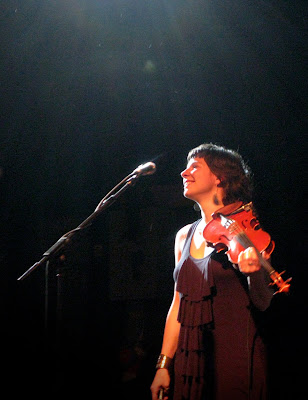 That is pretty much my description of what I saw tonight. I had been looking forward to see Thee Silver Mt Zion Memorial Orchestra for some time. Having been a long Godspeed! You Black Emperor advocate, and having listened the shit out of Silver Mt Zion's first LP He Has Left Us Alone But Shafts Of Light Sometimes Grace The Corner Of Our Rooms..., this was a must see event.

Paul and I got into Electric Ballroom just in time to catch Alexander Tucker playing his layered one man soundscapes. Armed with only a cello, an electric mandolin, many MANY effects pedals and his voice, Tucker produced a half hour of intricate psychedelic aesthetics. It is a little ramshackle but nonetheless impressive performance, and a perfect precursor for the main act.

When the band amble on stage, the Ballroom is rammed with people, and every single punter is in for a treat. Without much preamble, they launch into the one-two assault of "I Built A Metal Bird"/"I Fed My Metal Bird The Wings Of Other Metal Birds", a 15 minute plus opening that sets into motion one of the best gigs I have witnessed in quite some time. The gig - 2 hours, 6 songs - is breathtaking, blistering, beautiful, boisterous, beguiling. Frontman Efrim Menuck is in scintillating form, his much maligned vocals an absolute highlight, particularly on tracks of latest album Kollaps Tradixionales. There Is A Light, the second song of the night, is so much more mesmerising than its recorded version, and we get a better notion of how this group works. Dual violinists Sophie Trudeau and Jessica Moss trade lightning bolts of screeching strings, their instruments augmented by the sometime haunting, oft-times beautiful harmonies. David Payant, the 'newest' member of the band, is tight in all the right places, keeping everything tied together. The most underrated member of the band in my opinion, double bassist Thierry Amar, is brilliant, and the way he deftly wields the cumbersome instrument is a true sight to behold. This five piece (as it stands - the bands line up and personnel have changed extensively over the years) are sublime, no more so on final song of the main set, "One Million Died To Make This Sound" from their 2008 effort Thirteen Blues For Thirteen Moons. The ebb and flow of their sonically illuminating creation is post rock, orchestral wonderment, and the interplay of their vocals defy belief.

I know, im gushing. But it truly was an amazing performance on so many levels. There was so much interplay between Menuck and the audience too - some topics covered were David Cameron, jay Reatard, topless double decker buses, the highly unlikely return of Godspeed (and his insistence he is a member of the Specials), 6 Music, the band's aversion to pop music - all of which was highly amusing. Some people grumbled near me that there was too much talk - but songs of such magnitude need time to breathe - and retune! But it was another element that I feel is missing in most bands - that open willingness to not only connect with the audience, but to include them in the performance. To me, it added to the overall experience, pushing it through the glass ceiling and into the night time sky.

When they came on for a final song - "Microphones In The Trees" off their Pretty Little Lightning Paw EP of 2004 - they were taken aback by the sheer force of applause at their return. When the lights came on for good, it was with conflicted heart that I beat my retreat. Such a transcendant performance shouldn't ever have to end, should it?

Microphones In The Trees
Posted by Brendan T