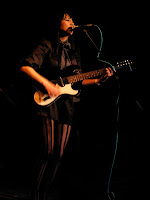 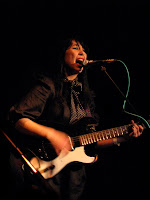 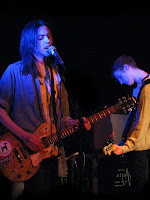 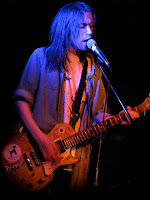 The ever-inventive White Heat @ The Lexington lined up another lively group of up and coming acts this evening, both of which I had heard a lot about and were very keen to see live. However, tonight’s bill proved to be a little underachieving, although both bands alluded to a load of potential.

I made it upstairs just in time for A Grave With No Name’s time slot – then waited around for half an hour – before the London boys took the stage. They apologised before announcing that their normal drummer couldn’t make it, so a friend was standing in. They then proceeded to play a very short set of their shoegaze rock, all the while taking on an air of cultured disdain. I was excited to see them after hearing favourable reviews of their latest LP Mountain Debris, but their set left me cold. I understand that a new percussionist brought in only a day or two before a gig limits the ability to cultivate the sounds they are known for, and to stamp their own sense of stage personality, but tonight they just didn’t bring it. Nevertheless I will look out for them in future – I’m a benefit of the doubt kinda guy…

This stood in good stead when the headline act sauntered on stage. The room swelled significantly as the four ladies from the U S of A grabbed their instruments and without further ado launched into their brand of surf.garage rock. They are very attractive – all dark hair, porcelain skin, slightly come hither – and their ‘rock uniform’ of choice this evening – tights, high heels, black and red garb, red lipstick - accentuated this notion. However – and this could have been coloured from my disappointment from the performance of the previous act – I was left a little cold and nonplussed by it all.

One of Subpop’s latest signings, Dum Girls are riding a wave of publicity that both a major independent label and being in the right place at the right time tends to generate. However, two things came glaringly to the fore tonight. Firstly, whilst the girls went methodically about recreating their style of fuzzy psyched out garage pop, Dee Dee holding many a man in thrall by her Medusa-like stare, I couldn’t help but look over my shoulder as a severe case of déjà vu walked across my grave. The girls’ surfabilly rock stylings, set in stone faraway glances, slight swaying from side to side, exuded elements from another all girl group, Japan’s 5678’s. I kept expecting hordes of black clad Asian men in masks and kitaro swords to storm in on either side of the room and carve the clientele into Tarantino-sized slices of salami. And yet, tonight, this seemed like a disconcerting – nay, bad – thing. Why? Kill Bill is an uber cool film – the 5678s are an uber cool band – so why does the comparison irk me so? Because it was then that the second problem finally hit home. These girls, for all the hype and hyperbole, aren’t original. Hey, their music is good, as is evidenced by their current releases, either with decent production or on lo-fi efforts. But live you are caught with the idea that there are other, better bands bandying about doing the same thing – hello Vivian Girls! Looking at you, Raveonettes!

So, although the band left a nice aural aftermath in their wake as they walked off stage 45 minutes later to a moderate level of appreciative applause, I felt a little short changed. Nevertheless, they hit London hard this past couple weeks, playing 5+ shows, and are coming back in May. As I mentioned before, I’m a benefit of the doubt kind of guy. If they hammer the road as much as they did in the past week, I might expect bigger and brighter things from them performance-wise.
Posted by Brendan T

Email ThisBlogThis!Share to TwitterShare to FacebookShare to Pinterest
Labels: A Grave With No Name, Dum Dum Girls, Lexington