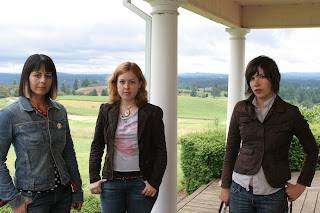 Last week I told you about the new album by Quasi, American Gongs. I even gave you two songs to sample. Have you bought the album yet? You should have - its fucking awesome.

Well, it was also brilliant to hear Sleater-Kinney's incendiary drummer Janet Weiss (and her beautiful harmonies!) on record again.

So I thought Id share three tidbits of Sleater-Kinney info that is likely to have you salivating.

First of all, Carrie Brownstein has her own blog, Monitor Mix. Its a goodun - check it out.

Secondly, Brownstein is in a movie! With The Shins/Broken Bells' own James Mercer! And its supposedly very good! Its called Some Days Are Better Than Others. Check the trailer below and make up your own minds - Im intrigued enough to check it out, even though it does smack a little of trying too hard for indie cred - but as I said, Brownstein + Mercer = must see.

Thirdly (and most importantly), Brownstein mentioned in an interview with IFC that a Sleater-Kinney reunion is definitely a possibility - and that she has hopes that in the next five years they will be firing on all cylinders again! This is great news indeed. Time to dust off One Beat and The Woods and have a Sleater-Kinney playlist today methinks!

Some Days are Better than Others (trailer) from matt mccormick on Vimeo.

Email ThisBlogThis!Share to TwitterShare to FacebookShare to Pinterest
Labels: Broken Bells, Carrie Brownstein, Janet Weiss, Quasi, Sleater-Kinney, Some Days Are Better Than Others, The Shins