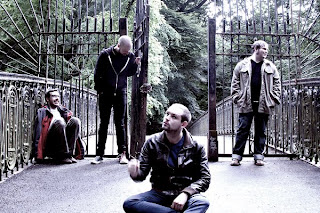 Much can be said about Scottish indie music at the moment - that Frightened Rabbit are finally garnering plaudits ad nauseum for their latest LP and live performances, thus having new found fans scurrying for the back catalogue; that bands with names like We Were Promised Jetpacks can offer moody atmospheric works that belie their monikers; that Glasvegas is shit. And whilst there has always been a section of Scottish music devoted to darker, edgier rock, until recently most surface dwelling music listeners would adhere Franz Ferdinand or Belle and Sebastian as being the mainstays of the country's musical scene. It is refreshing to see that bands that have been revered on their home soil are spreading their influences abroad, and tonight one such band, the Twilight Sad, get to show London its wares at the Relentless Garage.

First though, we are treated to Wild Palms, a London band getting a lot of press in certain circles for their exciting presence and prescient music. Im not sure if I got the right band, because neither were present here. Sure, there were some strong numbers, but most of it was filled out with padding, generic disco pop rock ditties that every man and his Korg are plinking out these days. I couldnt even say that the bands theatrics managed to apply the foundation necessary to cover such imperfections. The lighting show seemed to be run by someone with ADHD, and the smoke machine worked overtime, but all was underwhelming.

So unfortunately for Twilight Sad, I had my expectations considerably raised by the time they hit the stage. The Glaswegians have toured many a time down our way, the last most notably at the Lexington last year where they blew me away with their surprisingly loud distorted guitars powers what are essentially simplistic song structures, carried right through by a dynamic skinsman and strong, proudly accented frontman. With this memory still relatively fresh in my mind, as they immediately broke into personal favourite "Reflections of the Television" from last LP Forget The Night Ahead, a glaring omission became quite obvious. Singer James Graham's voice and vocals are intrinsic to Twilight Sad's appeal, and therefore their success as a live act. The vocals tonight were muddy for the most part, other times muffled by the wall of sound being bludgeoned out by guitarist Andy MacFarlane (which is an immensely good thing, I might add). The music itself was on form, but I felt sorry for the boys. They certainly had a good set, a choice selection from both the aforementioned album and their debut Fourteen Autumns & Fifteen Winters, and they performed strongly, particularly Mark Devine's military drumming that propelled each song forward with a force to be reckoned with. I have to say that I am a big fan of these guys, and they had quite a reception at the end, so all in all they got the job done and ticked the requisite boxes. Nevertheless, I felt that had the mixing been just so, the crowd would have truly experienced a great, rather than good, Twilight Sad performance.
Posted by Brendan T