Shearwater Drift Away And Get Golden 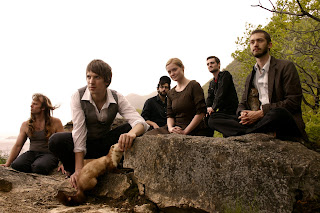 Shearwater's 2008 album Rooks was one of my favourite records of that year, with an amazing cover art of a man dressed in black standing on barren land, arms outstretched in the Jesus Christ pose, with a score of the titular birds covering him. The artwork captured the cold stark beauty of much of that album, and the track The Snow Leopard is still a personal fave that sits amongst my ever expanding playlist.

I only heard of these guys by chance. I had just arrived in London in August 08, and saw that another Canadian act (and one Id been wanting to see for years) The Constantines were double-billing with them in September at Bush Hall. Both bands blew me away in what was one of my first gigs in the UK.

So it goes as no surprise that when The Golden Archipelago hit the shelves last month, I was mighty excited, and it doesnt disappoint. Whilst not differing that far from the formula of its predecessor, the thematic aspects of the new album tie it together as a true complete album, something that is becoming rarer in this day and age. It is full of grandeur, loud/quiet dynamics, and gentle nuance, all orchestrated and fuelled by the theme of islands and Jonathan Meiburg's distinctive vocals.

I missed their Scala gig last month - I dont aim to do that again.