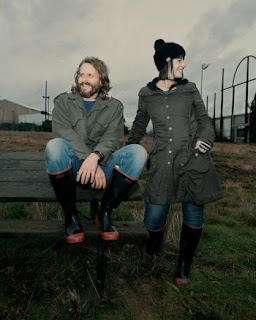 Quasi have been around for quite a while, having put out various sized and themed releases through Kill Rock Stars and and Touch and Go. They are also the "side project" of Heatmiser's Sam Coombes and Sleater-Kinney's Janet Weiss, ably supported on this album, American Gongs, by Stephen Malkmus and the Jicks' Joanna Bolme. Of course Quasi has outlasted both of those outfits (especially regrettable in Sleater-Kinney's case), but they have remained a niche oddity rather than a supergroup of sorts.

This is all about to change with this album. And they are actually touring it rather than sticking to Portland gigs, which will do much for their rotation. The album finally showcases Coombes' supreme axemanship and Weiss' authoritative drumming, and is further augmented by the fact that American Gongs is a proper album, with well constructed and cohesive songs. The Lee Ranaldo sounding "Little White Horse" and bluesy barroom glitter of "Rockabilly Party" show the band at its best sans the long workout jams (which are a treat live), whilst "The Jig Is Up" and "Everything And Nothing At All" denote their mournful, whiskey-soaked side. Quasi are a band that deserve to be noted - not just due to the superior musicianship of the parties involved, but to the fact that they are a fucking good band.