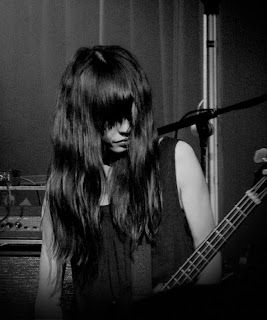 Last year was Japanese post rock instrumental gods Mono's 10th year anniversary. To mark such a momentous occasion (and to take a break from their famed incessant touring) the brooding four piece took time out to pen Hymn To The Immortal Wind, an album that truly epitomised the evolution of the band, then toured the world with an orchestra to bring it, and their past masterpieces, to life in a very different fashion. They played at Koko in saide guise, and it was truly phenomenal...so Im told. The gig sold out months in advance, and no means of cajoling or under the counter bartering could help me snavvle one of those hot tickets. Luckily the band have also put out a THREE LP+DVD release of their show in New York called Holy Ground, so that you can pretend you were there...

So we come to January 2010, when it is announced that Mono would be playing the Scala in March. I scrambled for my tickets, thinking that they would sell like hotcakes. Which surprised me so much when, last night, there were many a punter lining up to buy tickets at the door. My exasperation needed to be quickly doused by a feverish scull of an alcoholic beverage. But no biggie - I would finally be seeing them tonight, and they wil be great...they will be great...

And how. Their set being cut down to their more intimate, straightforward style - Takaakira and Yoda (guitar) bookending Tamaki (bass) out front, with the drum kit and imperial gong that is the domain of Yasunori holding proceedings at the back. Fully clad in black ( as always - I have not seen a picture of them since their genesis in any other colour), they ambled onstage to much acclaim, giving small bows before starting into one of the most sonically immersive performance you could ever hope to participate in. It is almost impossible to describe a Mono gig (or indeed any of their ilk - Explosions in the Sky or Mogwai comes to mind) in normal musical terms, as their 'set' is not easy to define. Although it is clear that they play seven songs all up, made most clear by the short breaks in between (funnily enough), the songs are placed in order to evoke an emotion - to cast a spell. Indeed, the crowd were in total thrall, allowing each song to build up in increments, the guitarists either seated on chairs or hunched over their effects pedals, Tamaki swaying softly as her bass drove these musical behemoths forwards, Yasunori dutifully tying everything together at the back. And when each song exploded - as Mono songs are wont to do - its not so much a release, as a realisation; an epiphany. This is heavy music, but not as you know it. It is beautiful - it is cathartic - it is dark, and yet golden. When Takaakira and Yoda meet together with their squalling distorted guitars, its like two massive acts of Mother Nature coming together as one, leaving everyone dumbstruck. The fact that any song could not stand out as a highlight is a testament, not to the mediocrity, but to the attitude of the songs - that they all informed each other, so that it was an experience rather than a series of songs like your average set list. Meticulously and emotionally performed, all without a single word spoken - a truly amazing gig.

Now with the gig over, Im not sure what to do with myself. I still rue the lost opportunity of missing Mono on their 'birthday', but am filed with awe at the display that I have just been privy to. They move on to storm the world once more, touring relentlessly. And it wont be that long before they are back, Im sure - that is, if you can wait that long. Im not sure that I - or anyone who witnessed them tonight - can.
Posted by Brendan T

Email ThisBlogThis!Share to TwitterShare to FacebookShare to Pinterest
Labels: Explosions In The Sky, Hymn To The Immortal Wind, Mogwai, Mono, Scala