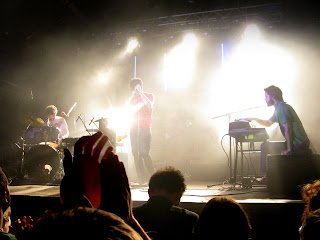 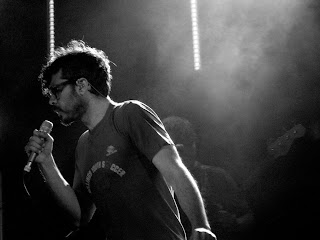 Two gigs in succession. Not that big a deal - Ive done 5 gigs in 7, plus Glastonbury, plus ATPs etc etc... But when you have a bad back, any length of time standing can be quite difficult, regardless of its purpose. Last night it was Mono, which was truly an aural experience that justified the pain suffered afterwards. Knowing I was backing up though, I took some anti-inflammatories and some steel will and roll along to Embankment.

Heaven, a well-known gay club under the arches just off Embankment Tube, has opened up to live music bills of late, in an attempt to make itself a musical mecca on the London live scene. With the likes of Deerhunter, Holy Fuck, A Place To Bury Strangers, Surfer Blood, Caribou and Broken Social Scene playing there in upcoming months, it certainly is booking well. Furthermore, the venue itself lends to an amazing concert vibe - cavernous arena, high stage, light show already in place, amazing sound system... And although the drinks were steep, I am impressed with what can happen here.

I wander in, Red Stripe in hand, just in time for Josiah Wolf to sit himself down at the drum kit which is set up surreptitiously at the front of the stage. Drummer for headlining act WHY?, Wolf's stripped back folksy kitsch is quite far removed from his day job, although it holds some of that wit and charm. Its a short set, made up of only three tracks from his debut album Jet Lag and a couple of covers, but as he stated in the beginning, 'Im just gonna settle you into the evening before we take things up a little.' He served his purpose well.

Next up is Popular Damage. I knew nothing of this threesome before they came onstage, although they have done a remix of an XX track which they played halfway through the set, and have remixed Digitalism and Tegan & Sara in the past also. They definitely show a lot of promise - something akin to Chew Lips, although nowhere near as shit - but I came away thinking that it all was a bit too busy. So many sounds were being thrown into the mix that although the songs were catchy in parts, they didnt add up as a whole. Overall, space was needed, something that the listener can get a grapple of. As it was, Potential Damage put on an energetic show - vocalist/keyboardist/guitarist/effectist (see what I mean?) Nadine was having such a good time on stage that you couldnt help but get into it also - but for me, they showed a lot of potential, but didnt provide the damage their moniker suggested.

Third on the bill was Berlin's I Might Be Wrong. The five piece evoke mid 90s indie pop rock, and whilst their influences come across as rather obvious, it is not detrimental in the slightest. Singer Lisa appears demure and yet assured as the frontperson, her vocals soaring hauntingly throughout the tapestry painted by the other bandmates. The band dynamic on stage was strange - the bass and guitar being put at the back - it detracted from the set only a little, as the band went through a tight track list mostly from current LP Circle The Yes. An enjoyable gig from a band I endeavour to find out more about - maybe as soon as I get home...

It isnt long before headliners WHY? storm the stage. The band are quite large in their home country, and tonight it shows - it feels like Ive walked into an American college student union from the accents that surround me. The threesome have swelled out to five - and again the guitarist and bassist are relegated to back of the stage, this time to accomodate for keyboardist Doug, drummer Josiah and frontman (and Josiah's brother) Jonathan 'Yoni' Wolf. The man is a quivering ball of energy, prowling the stage as he breaks into first song 'The Hollow'. WHY? play tracks off a number of their albums, not relying on their more indie and laid back current LP Eskimo Snow. And it is clear from the crowd that they know what their public want. The band is a weird hybrid, with Doug's Wurlitzer and effects pedals, combining with Josiah's drumming and occasional glockenspielling, intermingling with spiky and controlled fretwork at the back, augmenting Yoni's quasi-rapping rants and quirky movements (kissing his fist; walking like a penguin; roundhouse kicks). He is an uber geeky hip-hop genius, with his storytelling evoking a weird marriage of the Hold Steady and KRS-1 (not that they sound like either...), and their sound changes from generic college indie to more elegaic folk to more frenetic compositions... Overall though it is a huge amount of fun, and is musically accomplished to boot. There is a lot of fist pumping and lyric shouting around me in the crowd tonight, and although I couldnt claim to have the back catalogue knowledge of those diehards, I was sad to see the lights come up at the end of the set - bad back or no bad back...
Posted by Brendan T

Email ThisBlogThis!Share to TwitterShare to FacebookShare to Pinterest
Labels: Heaven, I Might Be Wrong, Josiah Wolf, Popular Damage, WHY?