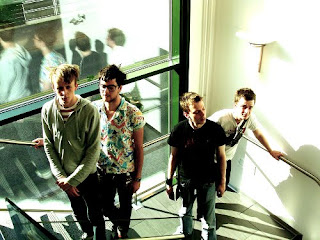 Errors were one of the first signing to Mogwai's impressive Rock Action Records. They are a Glaswegian 4 piece whose brand of "post-electro" has impressed many a fan since their inception in 2004. They released Come Down With Me last month, an album that not only confirms their status as one of the premier acts in their genre, but shows a level of confidence and ingenuity that not only allows for exciting times ahead, but for the future of instrumental rock. Although comparisons with the likes of Battles aren't exactly unfounded, Errors are their own wild beast, and one that are nigh on impossible to resist their charms.

Errors toured here earlier this month (sadly I missed their Scala show), but are likely to be back soon. Also check out their physical releases - Errors and Rock Action put a lot of effort into their vinyl. Anyway, here's the opening track off Come Down With Me.