Broken Water Whets The Appetite...And Then Some 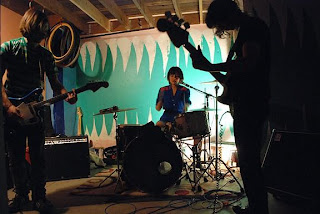 I dont know much about Broken Water - came across their name a few times in SXSW wrap ups - but a small listen to their gear off debut LP Whet (put out by Night People) explains the excitement being generated. Evoking the ghosts of indie fare that haunted Subpop's hallowed halls prior to the explosion of Nevermind, yet adhering to some of those guitar-driven aesthetics, the Olympia three piece amble their way along in a glum fashion, their eyes to the floor. I can really see this making an indelible impact in a packed bar shut off from the sun, soaked in whiskey and beer. Think Hazel, a dash of Low, with some of that lo-fi reverb sound that is very in vogue right now, but used to greater effect, inducing a psychedelic grind. I am massively impressed, and am searching for this album frantically - I think this will be a definite grower for me.

And as a special treat, I have not one, not two, but THREE tracks for your perusal. I really rate these guys...