Jonsi breaks away to Go Do 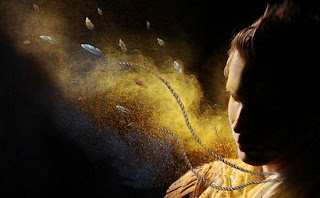 Jonsi, angelic songsmith/language maker-uperer of incendiary Icelandic outfit Sigur Ros, has been indelibly busy since the boys brought out their last album some years ago. He has most notably teamed up with boyfriend Alex Somers to produce album Riceboy Sleeps, and is just about to drop his first solo LP, Go. It holds on to all the hallmarks that make Sigur Ros one of the most amazing bands to ever have come into existence, but is more compact and 'experimental' (if you can call anything these Icelanders do as anything BUT experimental) than his band. Furthermore, we get a few more songs sung in English! What, we can sing along for real instead of making shit up that sounds vaguely like a high-pitched baby's banter? Seriously though, anything Jonsi touches is golden in my opinion, and Go does not disappoint - its, for wont of a better word, beautiful. Jonsi plays HMV Forum on May 26 and 27, with other UK/European dates to follow. The 1st show is sold out, but there are still tickets for the 2nd show - get excited to see something that will be truly magical.