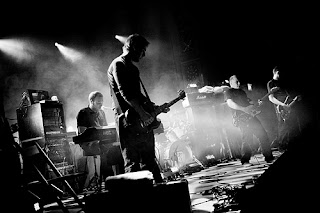 It was only a matter of time before I devoted some time to these guys. I fucking love them. I traveled to Luxembourg just to see them. I would have seen them at Field Day but I had a wedding - how rude! I love everything about them.

But there was no natural progression to my discovery of them. I wasnt into post rock and was ushered into their world via association. Hence Mogwai being in my Glove Fits column. I will put Mogwai into all my themed columns - Ill shoehorn them in if necessary! - but this one is a natural 'glove fit'.

Last week was about the Warlocks, and although I didnt mention it, it was through them that I began to embrace bands such as Black Angels and Dead Meadow. Mogwai opened up the sonic landscapes of instrumental rock bands, and have led me to (directly) Sigur Ros, Red Sparowes, Mono, and (indirectly) Explosions in the Sky (another of my all time fave bands).

But back to Mogwai. Again, like my 'discovery' of the Warlocks, I was in Rockinghorse Records in Brisbane. Again, just twiddling my thumbs, whiling away the time whilst I waited for my bus to arrive. This time they were having a massive sale, as they were leaving their smaller (and, in my opinion, much better) venue for a big store around teh corner. Many sales were to be made, and I was scouring the CDs and posters, trying vainly to look with disinterest but knowing fully that I would leave with an armful of goodies that I could barely afford - but thats what 2 minute noodles are for, right?

So Id picked up a Spain and a Morphine album, then my fingers brushed over a white CD cover. The sticker said $AUD2. The CD - a 1 song EP as it turned out - was all white, with one black and orange word emblazoned in capitals across its middle.

It drew me in, and I added it to my growing pile of purchases. The only reason I can fathom for me grabbing it is that Gremlins is one of my all time favourite movies (and still is - watched it at Christmas - Joe Dante is brilliance personified - have you ever seen The Burbs? Oh My God - but thats another story...) So how can a band that names itself after the furry creature be anything but awesome?

How right my instinct was.

When I got home, I went straight for the one CD that I knew nothing about, and put into the CD player. You know how I said that I shat myself when I heard Warlocks' Rise and Fall? Times that by about one million, and that is what happened next. For 21 minutes I was transfixed. And when the epic finished, I played it again. And again.

My housemate Sean came home. I made him sit down and I played Mogwai again. And another follower was born.

In fact every person I introduced to this, they fell under its thrall just as heavy as I did.

Since then, I have seen Mogwai quite a few times, and their gig back in 2006 at the Zoo in Brisbane is still my favourite gig ever. I am a rabid fan. And I hope that after listening to this song, you will be too. So here it is...

Mogwai - My Father My King
Posted by Brendan T