The Glove Fits #4 - Band of Horses 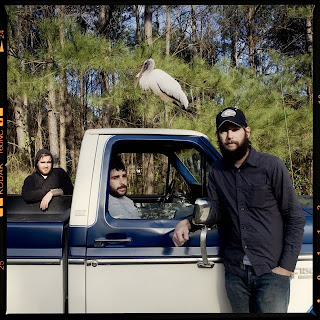 The fourth instalment of The Glove Fits sees a band that will be touring here next month. Seattle's Band of Horses have had a meteoric rise to the top over the past few years, producing two of the most beautiful, intricate and unique (I expect backlash there - bring it on, I have it all to back my statements up!) indie folk albums of the past decade in the process.

When I first heard this track, it was early 2006 and I was trawling the internet, settling on the Subpop website for the first time in quite a while. It was a revelatory hour or so for me, as I also discovered bands like Rogue Wave, The Helio Sequence, Holopaw and Fruit Bats. But it was The Funeral that caught me, and still does to this day. Its simple melancholic guitar plaintively screams BALLAD!, and yet as soon as Ben Bridwell opens his mouth I was stricken. The production is glossy and seamless, the entire musical palette on hand permeating the speakers to overtake your senses, happily in awe at a song that indelibly is invoking the inevitablity of a funeral.

Honestly, I cant remember a song that I played over and over consecutively on first listen as I did that day. Liars' Scissor has been the pick thus far this year, and even so I only listened to it five or so times before plugging it in with the rest of my playlist, waiting eagerly for Sisterworld's imminent release.

Even so, when they toured Australia at the eve of that year, I opted not to see them, instead spending my hard earned dough on Tapes 'n' Tapes and the Mountain Goats. I am yet to see Band of Horses - and wont see them this time around either (the April 12 show at KOKO already sold out, and the June 9 show at the Roundhouse selling fast). Still, all I need is my headphones and the epic production values that make this song positively shimmer, despite its subject matter, and Im golden.

Band of Horses - The Funeral
Posted by Brendan T

Email ThisBlogThis!Share to TwitterShare to FacebookShare to Pinterest
Labels: Band of Horses, Koko, Roundhouse, The Funeral