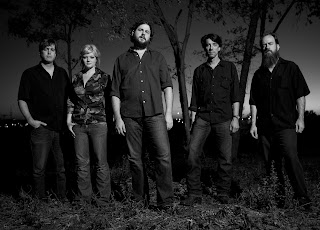 Its hard to believe that Drive By Truckers' new LP The Big To-Do is their eighth album. Furthermore, its shocking to think that after such prolific output and incendiary live shows, they are still in essence an underground band - or even worse, seen as an oddity or novelty act. The notion infuriates me. They are more akin to bands like Hold Steady or My Morning Jacket - lyrical storytellers with a psychedelic, almost Crazy Horse-lite take on riffery.

Whilst their albums of yore have been prone to sprawl - double album sprawl - The Big To Do is a welcome change, and is a great way to introduce yourselves to this great Atlanta, Georgia band. They still havent changed though - with stories about strippers, booze drenched dropouts and killer wives. The Big To-Do is a great record, chase it down, put it on, and immerse yourselves into the murky and yet somehow joyous Southern comforts of the Truckers.

Drive By Truckers - This Fucking Job
Posted by Brendan T

Email ThisBlogThis!Share to TwitterShare to FacebookShare to Pinterest
Labels: Crazy Horse, Drive By Truckers, My Morning Jacket, The Hold Steady