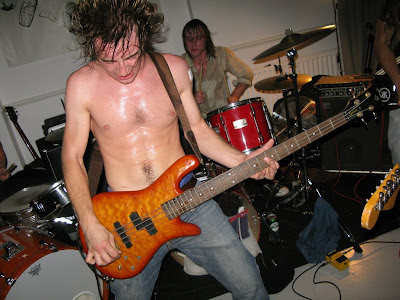 The start of this year has been a bit hit and miss for me on the music front, don't get me wrong there's been some great albums out in the first three months of the year but when I look back at the start of 2009 I realise just how high a pedestal 2010 had to reach. One album that really set 2009 off to a blinding, crashing, hammering start was the debut 12" from Action Beat, The Noise Band From Bletchley. So good I bought it twice!

More a force of nature than a band, the ever expanding and contracting Action Beat are truly, the epitome of the word 'awesome' live. The torrent of noise crashes over you with the force of an apocalyptic hurricane, braking bones and winning hearts and thing is, you'll love it, you'll lap it up, even though it hurts. Wrapping you up in their man made maelstrom of raw energy this really is a band who want it hard, fast, epic and fun.

On record the Action Beat don't let up with the torrent, but form a tighter, more cohesive whole, binding their unstoppable force to hit home with a focused barrage of energy. If they do ever pause, its only to hit you harder.

Last year I was lucky enough to catch Action Beat twice at 113 and Baldwin's Boudoir, Dalston. It might of destroyed me but both times I would of happily gone for back more and more.

The next opportunity you'll have to chatch Action Beat live in London is at the Blues Kitchen with the ever mighty That Fucking Tank as part of the Camden Crawl, it 'll be a good way to go out!

Email ThisBlogThis!Share to TwitterShare to FacebookShare to Pinterest
Labels: Action Beat, The Noise Band From Bletchley