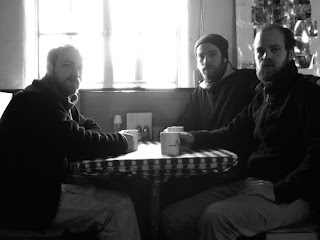 The Carney Bros, AKA psych stoners Pontiak, blew Sonic Masala away back in March when they went mano a mano with White Hills in a heavyweight Thrill Jockey showcase at the Luminaire - see my review here. Since then they have released their fifth LP, Living, and show no signs of slowing down and having a break. Tonight they are here as a sole headliner at the Old Blue Last, alongside Dethscalator. This should be a scintillating set, and at six quid, why not? We'll see you there (being much less civilised than the boys are above...).
Pontiak - Algiers By Day
Posted by Brendan T