Friday Cover Up - Europop and Dirge Put Through The Supersonic Wringer 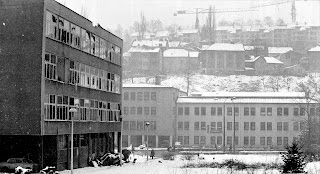 What a week, eh? And now its time for the weekend. I have nothing planned other than to chill out and spend the time at home, maybe get my hair cut, watch movies, and mentally prepare for the musical onslaught of another week, with Nisennenmondai, Screaming Females and Pontiak all doing shows this week. Plus, for those of you fortunate enough to be heading to Birmingham this weekend, Supersonic is going to wreak all kinds of awesomeness, with the likes of Swans, Hallogallo 2010, Godflesh, Napalm Death and many many more gracing the various stages.
So, in tribute to Supersonic, AND to a little post I did earlier in the week about, erm...a-ha, I have chosen a couple of covers that highlight them both. Drone merchants Nadja put out an amazing record early this year with Pyramids, called, funnily enough, Pyramids With Nadja. But before this they put out an amazing dronecore album made up of covers called When I See The Sun Always Shines On TV. The covers, ranging from Slayer and My Bloody Valentine to Elliott Smith and Codeine, are drone metal crossover gems, every one. SO today, I have chosen Nadja's reworked version of a-ha's 'The Sun Always Shines On TV', plus their toned down into the ground version of Swans' 'No Cure For The Lonely'. Have a great weekend!