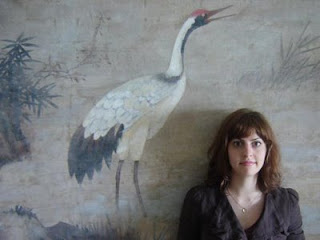 You know when you are staring off into space, and you hear a song unexpectedly, and its even more disconcerting because you've heard it before but you have no idea where, and no one else around you has heard the song, and when you find out the artist they're unknown to you, and then the song haunts you incessantly, slowly driving you insane with its vague familiarities?
No?
Well then...It happened to me anyway.
First of all, Ill note that this isnt the music we normally listen to and comment upon - but its stuck with me, so its good regardless. Last Saturday, so over a week ago. Michael over at Crash Avenue sent me the new LP by New York chanteuse Jenny Gillespie, Kindred. I fell in love with the first track, 'Golden Central', a track that evokes Kate Bush in its stark audacity. However its the 3rd track, 'In The Garden', that was bugging me. You see, Im near positive that I havent heard it before - I definitely had never heard of Gillespie before I received Michael's email - so how can this be? Its electronic squall at the end punctuating what is at its heart a tale of brazen exploration of one's spirituality struck a chord, but it builds in texture, so that what initially is a song with vocals and slight effects ends with handclaps, synth, electric guitar, drums...its a nice little tune.
Then I found out it is a cover! And I only found that out today! Finally, my brain will stop itching! (The cover is by indie folkster Doug Burr - and its pretty good too...)
However, I must state that Kindred is in itself an addictive understated gem, with the delicate and yet intricate compositions underpinning the beauty that is Jenny Gillespie's vocals, and aside from 'Swimming In Amber', which I found overcrowded, the album should win over many fans of this genre blend of electronica/folk/pop.
Jenny Gillespie - Golden Central
Jenny Gillespie - In The Garden
Posted by Brendan T