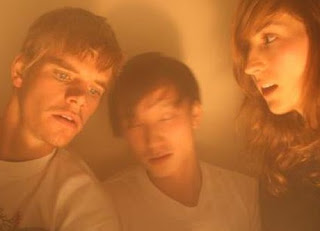 One of our favourite bands of the past few years is definitely Women. This year's Public Strain was a fantastic follow up of their self-titled debut last year, and is one of the best albums of 2010. We had the pleasure of seeing them twice - once at Cargo, once at The Social - and they are consummate performers, creating a perfectly balanced set of their... So in order to sculpt such a sound in a short period of time, you'd have to pour all your energy into it wouldnt you? Apparently not - as is the wont of most bands the world over, it is important to have several creative musical outlets, and Women's is in Friendo...
A more languid affair, Friendo is the project of Women drummer Michael Wallace, along with Nicole Brunel and Henry Hseih. Wallace steps out from behind the kit to take the reins. Their album Cold Toads (out via St Ives Records in an exclusively limited run of nice vinyl) isnt that far removed from his day job, but that is not a derogatory term. Having only heard it the once, I can say that it is an accomplished effort that smacks of Women-like aesthetics, and a nice marriage in harmonious structure with offcuts of wailing static noise - pretty much guaranteeing that I will love it! And its not a one-off project either - Wallace has talked of a split with Women, as well as with some UK acts, in the near future.
Friendo - Callers
Friendo - Oversees
Friendo - Counter/Time
Posted by Brendan T