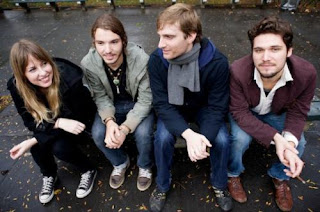 Let me tell you, straight off the bat - typing 'ladycop' into Google images brings some amazingly bizarre returns, so any posts after this one based on these guys will be off the wall...

Ladycop are a Brooklyn four piece who are adament that indie rock can still be - well, interesting. My first listen of 'Idea Maker' was one of quiet admiration - the shimmering dynamics of the guitar and soft vocals was a nice blend to the mesmerising one-take music clip accompanying it. They add a certain pensiveness to their songs that leaves you on edge, waiting for the whole composition to implode and self destruct. Listening to other tracks like 'Julien' has them embracing 90s indie more emphatically, whilst 'I Just Felt Like Anyone Else' swims in waters somewhere between. So Im finding Ladycop to not be as arresting as I first imagined (oh, the punnage!), but still intriguing enough to give them more of a listen.

Which is lucky really, because they grace the Old Blue Last next week after spending dates flitting around the UK countryside. Keep an eye out for em.