Thread Pulls pull on mine 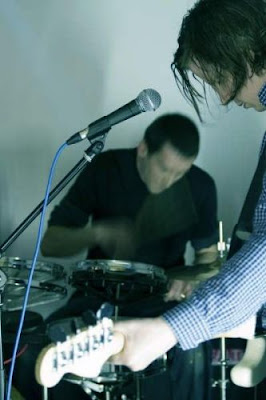 The day I fled these cold shores in search of less hectic and sunnier climes for my hols I naturally stocked up on some new music to keep quiet while away. One such band that I had been meaning to check out ever since I had a very random music chat with a barman in Dublin (I was there on a stag do, its a miracle I remembered anything to be honest) is Dublin's Thread Pulls.

Thread Pulls' debut album New Thoughts dropped in late September in Ireland and a week or so ago here in the UK and ever since the drunken banter that introduced me to the band I've been intrigued. To be honest I don't know a massive amount about Thread Pulls but a bit of digging does hint at an intriguing past, they've certainly done their dues on the gig front. As a trio Thread Pulls played ATP back in 2004, off the back of their Summer Songs EP but it seems since then they've been a bit of a slow burner, taking til this year to release their debut L.P New Thoughts, out on Osaka recordings, as a duo and it seems to signal a bit of rebirth for the band.

Rhythm driven minimal electronic post-punk would be my way of describing Thread Pulls, stripped back to drums, bass and icy, flat vocals, with the odd touch of trumpet and a smear of synth. There's tribal beat influences in there too, influences of all kinds pepper the album in fact, but their tracks always feel sparse, considered. You sense that time has allowed a great deal of thought to go into New Thoughts, of what to take out, how little can been left, not what else can be added. Hopefully New Thoughts will open a faster revolving door for Thread Pulls.