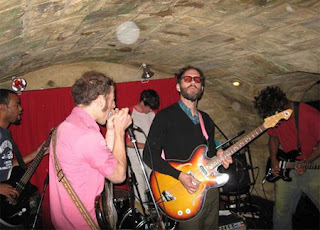 Yep, you heard right, the Detroit garage punk toerags flying the Siltbreeze flag, Tyvek, will be touring our fine land come February 2011. How does Sonic Masala know this? Well, pretty much from the horse's mouth. One of the members of Tyvek is in the touring band of Demons, Wolf Eyes' Nate Young's visual arts mindfuck menagerie, who are currently playing Supersonic in Birmingham. One of my friends got talking to him based on the coincidence of wearing a Tyvek shirt that he himself had made, and he then dropped the bomb. He also gave my friend a Tyvek demo cassette - a brilliant run-in if Ive ever heard one! (AND our first exclusive...)
And why are they touring? Well, just in time to promote their new LP of course! Nothing Fits, out on In The Red, comes out in November 9, promising to be as breakneck, messy, and addictive as their self titled effort of last year. Here's a new taster of what to expect...
Tyvek - 4312
Posted by Brendan T