Getting The Night Terrors 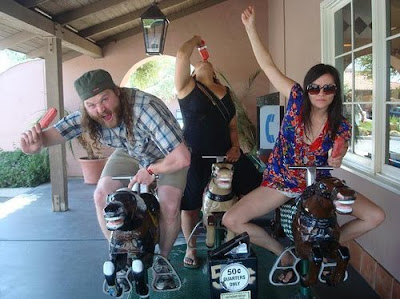 I only came across Seattle's Helms Alee a fortnight ago, which is a god damned shame. The best band on Hydra Head Records (sorry Torche, you're just pipped here), they released an album back in 2008 called Night Terror. Its brilliant. Brilliant! I thought it was new - I wanted to put it on my top ten of the year - I now want to step back in time and hear it in its infancy, then spend 2 years listening to it... Its heavy, melodic, raw, yet well defined - its marriage of post-metal and shoegaze indie is engrossing, and astounding in how well its been executed here. The three piece (Ben Verellen, Dana James and Hozoji Margullis) trade melodic density, tremolo-stained guitar, churning bass and akimbo drumming with unauthorised efficiency, and the amazing guy/girl vocal interplay with their deft understanding of quiet and tense layered build ups adds further dimensions to each track. I love this album!!!!!!!!!!
Since then Helms Alee havent released much, although Verellen has introduced his own amplifiers that are amazingly crafted and used by the likes of Sleep, Young Widows and Against Me. However they have just completed a massive tour with the likes of the aforementioned Young Widows, along with Red Sparowes and Boris, and are finally reentering the studio with Night Terror producer Matt Bayles for an album ready for early 2011. In the downtime between then and now, get Night Terror. Its amazing.
Helms Alee - New Roll
Helms Alee - A Weirding Away
Posted by Brendan T