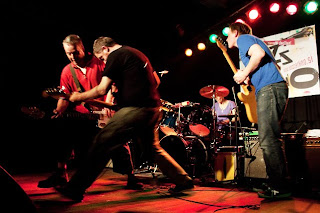 Upset The Rhythm are presenting Dutch post-punk pioneers The Ex tonight at Tufnell Park's The Dome (an interesting venue - seeing Drum Eyes and Lightning Bolt there last year has been indelibly marked onto my consciousness). The four piece have been plying their trade for over 30 years, playing close to 1400 gigs across Europe, the US and Africa. They have released 20 albums, the latest being this year's Catch My Shoe, their 1st since 2004 and the 1st with new singer Arnold De Boer. Speaking to the Ex's guitarist Andy Moor, we can expect a large gamut of the aural assault to be from the new album, but they will be reaching deep into their pockets for some gems that reach right back to their inception years.
And if that wasnt enough to slake the thirst of an rabid music nut, The Ex are being supported by Tokyo's noise pocket rockets Nisennenmondai, Dalston racket merchants Trash Kit, and sonic shit-stirrer Nonhorse. This show is massive, so get tix now!
The Ex - Maybe I Was The Pilot
The Ex - Sister
Posted by Brendan T