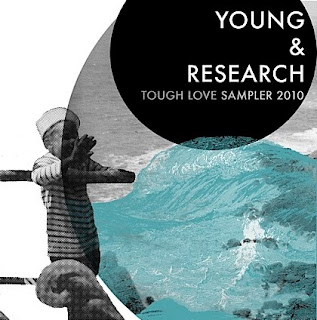 I grabbed Tough Love Records' new Sampler Young & Research the other day to see what they are delving into for the latter months of 2010.

Some catchy tracks that gets the toes involuntarily tapping - CYMBALS, Dream Cop, - others have a bit more skill and nous in my opinion, yet aren't necessarily to my taste - Lazy Hurricane, Calories, Young Governor and Weird Dreams - but there were few bands that held any prolonged interest or intrigue. But then I got to the second, dark side of the sampler... There are some very fine acts here, as I knew Tough Love was capable of producing. So I thought that I would just give a one to two sentence review of the Sonic Masala seal-of-approval acts, and then you can go seem em play a venue near you!
Sauna Youth - Punk shoegazey garage outfit from Brighton - a hell of a lot of fun. Have released a cassette and 7", both still available; they smashed up Offset Festival last month; they play the Lamb and Lion on the 8th; remind me of The Bronx, only if Matt Caughthran fronted Shooting At Unarmed Men. Sauna Youth - My Gold's Bangla
Prize Pets - loud Nottingham boys who pillage Black Flag then put it through an incredibly erratic woodchipper. Its weird, loud, visceral, and very exciting - and, for once, they arent from East London. Next London gig - 30/10, Old Blue Last w/ Sex Beet, Cold Pumas, Weird Dreams. http://www.box.net/shared/rotzl8olv7
Girls Names - Belfast group obsessed with Twin Peaks, wined and dined by Captured Tracks, love their reverb, but also very good. Have only just discovered them, and am trying to grab their EP from earlier this year as we speak, as well as tape split with Heavy Hawaii. Play two gigs this month at The Drop, including one with previous postee and UTR kids Peepholes as well as Weird Dreams. Girls Names - Falling (Julee Cruise cover - live)
Sea Pinks - solo project of Girls Names' Neil. His single is a sped up and colourfast version of his day band, and involves horticultural references, making it ok to know your hyacinths from your hydrangeas. Sea Pinks - Bobby Beau
Bhurgeist - Yorkshiremen who warble their way into your heart underscored by some J Mascis noodling and slight scowls on their faces - probably because they still live at home and have to deal with Nick Clegg. Hey, Im feeling the rage too. Disgruntled kin to Spectrals.
Bhurgeist - Slobro

Yellow Ostrich - New Yawker Alex Schaaf (also fronts band The Chairs) goes on his own; fairly prolific; makes unique indie pop folk tunes that intrigue as much as they entice.
Yellow Ostrich - Mary Ann
Drew Price's Bermuda Triangle - weird drawn out psych tripped shimmer from American Drew Price, who in this track sounds like Damon Albarn, in a decidedly good way. Drifts along in a haze, leaves you with the munchies. Drew Price's Bermuda Triangle - Tiny And All Alone
Posted by Brendan T