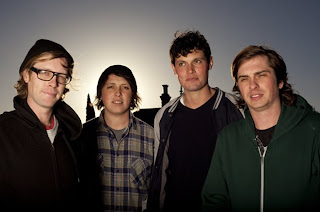 Auckland's Surf City have two obstacles to overcome before they even strike a chord -firstly, the past year's penchant for beach pop has unnecessarily placed them in that genre due to their moniker, and secondly because they are from New Zealand. The Flying Nun label, the Clean, the name - they are automatically coming with baggage. However, if they had been able to hold on to their original title, rather than cutting the 'Kill' from the front due to an existing UK band, it would give a truer sense of their influences - Jesus and Mary Chain opens the door to the Zombies, Sonic Youth and current quirky noiseniks Animal Collective. They have been ruffling global feathers for a couple of years since their self titled EP. Now these boys are stepping up again with their debut LP Kudos coming out on Fire Records next month. The title track sums it all up nicely – circular drone, guitar jangle, off-kilter melody, and a ray of sunshine pushing relentlessly through the clouds. I expect big things from this release - cant wait.