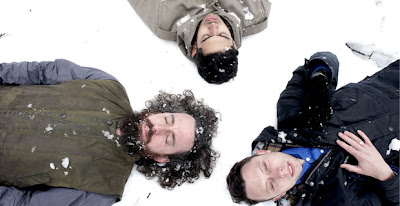 I have had the pleasure of seeing Australia's purveyors of minimalist post punk My Disco on a number of occassions, in a number of varying situations (on a big festival stage; in small boozy venues; in a smashed up disused art gallery; in a car park) and they have always been able to blow away the last vestiges of your sanity. They are relentless in chasing that one sound, groove, rhythm, and sticking to it sometimes for 20 minutes. It is a true testament to their cause that My Disco have any love at all for their jarring dissonance. For whilst their sound is jagged and abrasive, as each member of the band seek their own personal metronomic enlightenment in any one song, the whole comes together in a organic form, fusing first with each other then with the audience.
In saying that, I had a discussion with another My Disco acolyte Andy back in April when I was sequestered in Australia, and I had to grudgingly agree with him that their second LP, Paradise, didnt really offer anything new to the experimental exploration that My Disco had made their archetypal blueprint. I saw them when returning to London at the Lexington, and they were still brilliant live - but very few new tracks were offered, other than their epic 'single' Young.
So it was a surprise to hear first single from their third album Little Joy, 'Turn', had a more tribal and - dare I say it? - dancey approach to the syncopated rhythms. Now that I have had said album in my possession for the past week (out for general release via Shock Records on Friday), I can safely say that it is a true return to the sonic extrapolations that My Disco fanatics have longed for, whilst most likely garnering new fans.
I still liked Paradise, don't get me wrong, it just felt like an elongated Cancer - whereas Little Joy comes across as a true new direction. As always, it is more in the repetition and the absence of sound rather than what actually does exist, and whilst preivious collaborator Steve Albini keeps the dischordant tones, further mixing by Scott Horscroft (he who mixed Silverchair?) provides a shimmering element to the dissonance that helps each track push deeper into the psyche. Its a true triumph, an amazing tonal feat of strength. My Disco are back, and they aren't happy - but if anger brings forth this kind of dystopian beauty, you should be.
My Disco - Sunray
My Disco - With Age
Posted by Brendan T